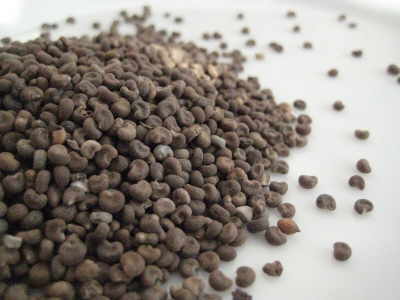 Abelmoschus moschatus from which Ambrette Seed is obtained is an extremely aromatic frost hardy plant that has many medicinal and perfumery applications and is a native plant to India. It belongs to the Mallow family.

The seed of the plant (from where the essential oil is extracted) has a sweet, floral and heady fragrance when ground, often compared to animal musk which is why its latin name of moschatus (Literally latin for Musk) is used.

Almost always used (as an oil) for its musky fragrance in the high end perfume industry, it is also used by aromatherapists for circulation problems and with aches and pains (although its expense makes it a very considered choice in this area) plus it has a reputation for assisting with depression and anxiety.

Ambrette Seed is a complex heady and rich fragrance with evident woody and heavy musky tones. It most often used in oriental and blends intended for the masculine market by the perfume industry.

It has a reputation for being an aphrodisiac!

The plant has many culinary uses too. The seeds are added to coffee specifically by Arabic cultures whilst the unripe pods (“musk okra”), the leaves and new shoots are eaten as vegetables. Tobacco is sometimes flavoured with the ground seed or the flowers of the plant.