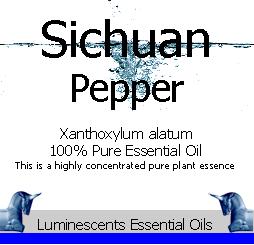 Sichuan Pepper Essential Oil is less commonly known as Mullilam (which is actually Zanthoxylum limonella)  or The Toothache Tree and there are many species.

The North American species, Z. americanum, is also known as The Toothache Tree. Due to the anaesthetic power of its alkamide constituents, the plant is effective in suppressing toothache temporarily if unripe fruits or the wood of young branches are chewed. Another plant rich in alkamides, paracress, has similar names.

Mainly culinary in use although it is known as the toothache tree for very good reasons, unlike clove which dulls toothache, Sichuan Pepper Essential Oil has anaesthetic qualities. It is used in perfumery a little and has good anti inflammatory properties.

Most representatives of this genus are found in the Himalaya region, and some in Central, South, South East and East Asia.

American and African Zanthoxylum species have not yet been put to culinary use.

The most important species are:

All species mentioned here have their place in local cuisines and can (excepting Z. schinifolium) mostly be used interchangeably. Literature often gives contradicting information which spice is used where; furthermore, Zanthoxylum is a difficult genus with many different, similar and not well-researched species.