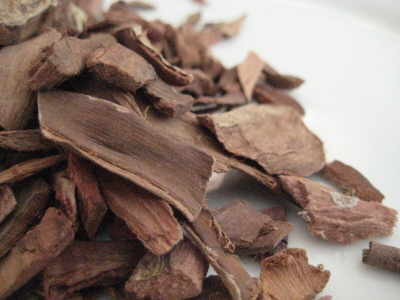 Also known as Arjuna or Arjun Tree Bark in English, Thella Maddi in Telugu, Kumbuk in Sinhala, Marudha Maram in Tamil and Neer Maruthu in Malayalam. It is known as Matthimara in Kannada and Kohda in Rajasthan.

Terminalia arjuna from which the bark known simply as Arjuna bark is obtained, is a tree of the genus Terminalia. It is commonly known as Arjuna or Arjun Tree Bark in English, Thella Maddi in Telugu, Kumbuk in Sinhala, Marudha Maram in Tamil and Neer Maruthu in Malayalam. It is known as Matthimara in Kannada and Kohda in Rajasthan.

The tree grows to around 20 to 25 metres in height and is distinguished by a prominent buttressed trunk. It forms a wide and large canopy at its crown and the branches drop downwards. It has oblong, conical leaves which are green on the top and brown below. It has smooth, grey bark and pale yellow flowers which appear between March and June.

its smooth and hairless but fibrous woody fruit is around 2 to 3 centimetres in size and divided into five wings which appears between September and November.

Distribution and Habitat of Arjuna:-

The tree is usually found growing on river banks or near dry river beds in Bangladesh and central India. It has been introduced to northern parts of South America.

There are three species of Terminalia all of which are used for traditional medicinal purposes. These species are Terminalia arjuna (this product) , Terminalia bellerica, and Terminalia chebula both of which have been traditionally used to help with high level of cholesterol.

The bark of the tree was introduced originally into Ayurveda as a treatment for heart disease by Vagbhata (c. 7th century CE). who is one of the principal Ayurvedic classical commentators.

It was traditionally prepared as a milk infusion but was also mentioned in many ancient Indian vedas, and was a known practice for thousands of years, passed down by tradition, before vagbhata mentioned it in his writings. Vagbhata mentions Arjuna in the treatment of wounds, haemorrhages and ulcers, applied topically as a powder. The bark has traditionally been used to treat heart disease for centuries, which is why it got the nickname “Guardian of the heart.” The hero of the famous epic “Mahabharata”, was named after this tree because of its protective effects.

In Theravada Buddhism, Arjuna is said to have been used as the tree for achieved enlightenment, or Bodhi by tenth Lord Buddha called “Anomadassi.