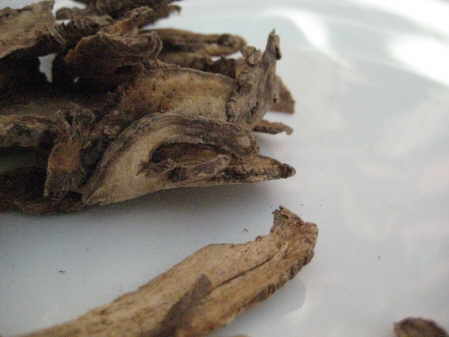 Also known in Japan as Shishiudo

Du Huo (Angelica pubescens) commonly known in China as Du Huo or in Japan as Shishiudo is a wildly grown species of angelica native to China and Japan and is just one of the many species of Angelica. It  grows predominantly near river banks, along streams and among rocky shrubs.The root of the plant is widely used for its medicinal properties and is known to contain furanocoumarins and angelicotoxin

It is anti-inflammatory, antirheumatic, carminative, nervine and a vasodilator.

It is used in decoction to promote menstruation and to treat rheumatoid arthritis, rheumatism, headache, toothache and as a poultice for abscesses. It is used medicinally in the same ways as Angelica dahurica (Bai Zhi).

The root is analgesic, anodyne, antibacterial, antidote, carminative, diaphoretic, diuretic, and poultice. It is used in the treatment of  headache, rhinitis, boils, carbuncles and various skin ailments.

It appears to be of value in treating the facial pain of trigeminal neuralgia. Small quantities of angelicotoxin, one of the active ingredients in the root, have an excitatory effect on the respiratory centre, central nervous system and vasculomotor centre. It increases the rate of respiration, increases blood pressure, decreases the pulse, increases the secretion of saliva and induces vomiting. In large doses it can cause convulsions and generalized paralysis.