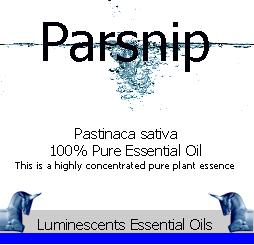 Parsnip essential oil is extracted from the root of the plant (Pastinaca sativa) by steam distillation and has a long historical and traditional use in Europe but it is not so widely used today and is therefore somewhat rare.

Apart from its historical and largely inneffective use for treating obesity, Parsnip essential oil was also once also used to treat kidney disorders, blood pressure and heart problems, asthma, anaemia, and to help support liver function and blood circulation. It is still used to help with the pain of rheumatism through massaging the well diluted essential oil into the affected area.

Parsnips were known in Rome although Pliny complained that it was impossible to attenuate their strong flavour. According to Pliny, Parsnips were held in such repute by the Emperor Tiberius that he had them annually brought to Rome from the banks of the Rhine.

CAUTIONS: The essential oil is not generally or typically used in aromatherapy since it will almost definitely cause some skin sensitivity which might be only mild but in some cases severe, The sensitivity is especially prone to mucous membrane, however, well diluted and massaged into painful rheumatism affected areas it has no sensitivity issues