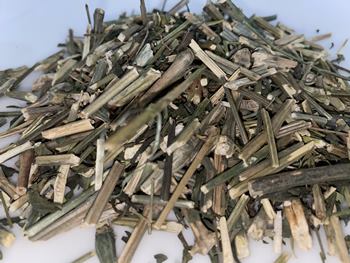 Andrographis paniculata from which the herb commonly known as Creat or Green Chiretta is obtained is an annual herbaceous plant in the family Acanthaceae, native to India and Sri Lanka.

It is also widely cultivated in Southern and Southeastern Asia where it is a useful herb of Chinese Traditional Medicine (CTM) and known as chuan xin lian although it is much better known in the Ayurdvedic discipline.

Distribution and Habitat of Green Chiretta :-

The plant grows as an erect herb to a height of 30–110 cm (12–43 in) in moist, shady places. The slender stem is dark green, square in cross-section with longitudinal furrows and wings along the angles. The lance-shaped leaves have hairless blades measuring up to 8 cm (3.1 in) long by 2.5 cm (0.98 in). The small flowers are pink, solitary, arranged in lax spreading racemes or panicles. The fruit is a capsule around 2 cm (0.79 in) long and a few millimeters wide. It contains many yellow-brown seeds. The seeds are subquadrate, rugose and glabrous. The flowering time is September to December.

It is reported to be a treatment for bacterial infections and some minor infections. In the past the leaves and roots were used for such purposes; the whole plant is now  used.