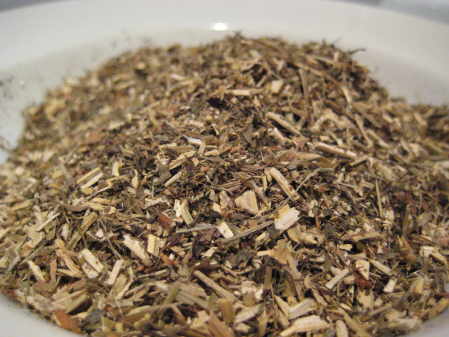 Melilot Herb (Melilotus officinalis) is a genus in the family Fabaceae. Members are known as common grassland plants and as weeds of cultivated ground. Originally from Europe and Asia, it is now found worldwide.

The Melilots or Sweet Clovers – formerly known as Melilot Trefoils and assigned, with the common clovers, to the large genus Trifolium, but now grouped in the genus Melilotus – are not very common in Britain, being not truly native, though they have become naturalised, having been extensively cultivated for fodder formerly, especially the common yellow species, Melilotus officinalis

The Melilots are perennial herbs, 2 to 4 feet high, found in dry fields and along roadsides, in waste places and chalky banks, especially along railway banks and near lime kilns. The smooth, erect stems are much branched, the leaves placed on alternate sides of the stems are smooth and trifoliate, the leaflets oval. The plants bear long racemes of small, sweet-scented, yellow or white, papilionaceous flowers in the yellow species, the keel of the flower much shorter than the other parts and containing much honey. They are succeeded by broad, black, one-seeded pods, transversely wrinkled.

All species of Melilot Herb, when in flower, have a peculiar sweet odour, which by drying becomes much stronger and more agreeable, somewhat like that of the Tonka bean, this similarity being accounted for by the fact that they both contain the same chemical principle, Coumarin, which is also present in new-mown hay and woodruff, which have the identical fragrance.

The name of this genus comes from the words Mel (honey) and lotus (meaning honeylotus), the plants being great favourites of the bees.

The tender foliage makes the plant acceptable to horses and other animals, and it is said that deer browse on it, hence its name ‘Hart’s Clover. ‘ Galen used to prescribe Melilot plaster to his Imperial and aristocratic patients when they suffered from inflammatory tumours or swelled joints, and the plant is used even in the present day in some parts of continental Europe for this purpose.

The herb has aromatic, emollient and carminative properties. It was formerly much esteemed in medicine as an emollient and digestive and is recommended by Gerard for many complaints, the juice for clearing the eyesight, and, boiled with lard and other ingredients, as an application to wens and ulcers, and mixed with wine, ‘it mitigateth the paine of the eares and taketh away the paine of the head.’

An ointment made of the herb helps with idiopathic headaches; long-standing neuralgias; coldness, tenderness, lameness or marked soreness of the limbs, A tea helps with painful menstruation with lameness or sensation of cold; menstrual colic; ovarian neuralgia; colic with diarrhoea and flatulence.

The dried plant has been employed to scent snuff and smoking tobacco and may be laid among linen for the same purpose as lavender. When packed with furs, Melilot is said to act like camphor and preserve them from moths, besides imparting a pleasant fragrance.

‘In Switzerland, Melilot Herb abounds in the pastures and is an ingredient in the green Swiss cheese called Schabzieger. The Schabzieger cheese is made by the curd being pressed in boxes with holes to let the whey run out; and when a considerable quantity has been collected and putrefaction begins, it is worked into a paste with a large proportion of the dried herb Melilotus, reduced to a powder.

The herb is called in the country dialect “Zieger kraut,” curd herb. The paste thus produced is pressed into moulds of the shape of a common flowerpot and the putrefaction being stopped by the aromatic herb, it dries into a solid mass and keeps unchanged for any length of time. When used, it is rasped or grated and the powder mixed with fresh butter is spread upon bread. ‘ (Syme and Sowerby, English Botany.)