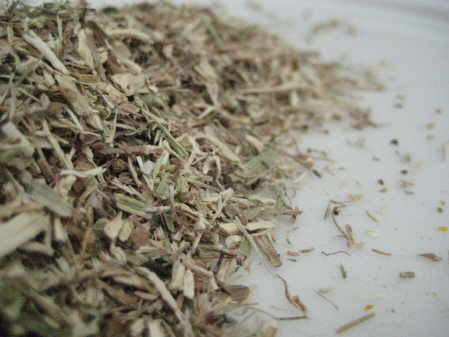 Nettle Root (Urtica dioica) sometimes known as Stinging Nettle or Common Nettle is a perennial plant native to Europe, Asia and Africa and some parts of the USA. Five of the six subspecies sting with hypodermic like needles which inject histamine and other chemicals when in contact with skin.

There are over 500 species of nettles, some of which have a sting so bad, it lasts for months and may cause death. The plant grows to 2 or 3 feet and in covered with down as well as stinging hairs. The leaves are heart-shaped and come to a point. The flowers are green and bloom from June to September. There are male and female flowers usually on separate plants.

In Germany today stinging nettle is sold as an herbal drug for prostate diseases and as a diuretic. It is a common ingredient in other herbal drugs produced in Germany for rheumatic complaints and inflammatory conditions (especially for the lower urinary tract and prostate). It is rich in iron.

Nettle Tea has been used through history as a detoxifier for the blood system, removing unwanted impurities. It also helps with lowering blood sugar and improving digestion and relieving pain.

Nettle Root has been used as a diuretic, to fortify the blood, against arthritis and rheumatism. Externally it has been used to improve the appearance of the hair, and is said to be a remedy against oily hair and dandruff. Many shampoos contain nettle extract to increase shine.

In Brazilian herbal medicine the entire plant is used for excessive menstrual bleeding, diabetes, urinary disorders and respiratory problems including allergies. Externally, an infusion is used for skin problems.

In Peru nettle is used against a variety of complaints such as muscular and arthritic pain, eczema, ulcers, asthma, diabetes, intestinal inflammation, nosebleeds and rheumatism. Externally it is used for inflammations, sciatica, wounds and head lice.

In Germany today stinging nettle is sold as an herbal drug for prostate diseases and as a diuretic. It is a common ingredient in other herbal drugs produced in Germany for rheumatic complaints and inflammatory conditions (especially for the lower urinary tract and prostate).

Folklore and History of Nettle Root:-

The plant has been widely used by herbalists around the world for centuries. In the first century AD, the Greek physicians Dioscorides and Galen reported the leaf and root of the nettle had diuretic and laxative properties and was useful for asthma, pleurisy and spleen illnesses.

Bandages soaked in a root and stem infusion were used in early American medicine to stop the bleeding of wounds; an account of this use was recorded by Dr. Francis P. Procher, a surgeon and physician in the Southern Confederacy during the American Civil War.

Nettle leaves were also recommended as a nutritional food and as a weight loss aid by the famous American plant forager and naturalist, Euell Gibbons.