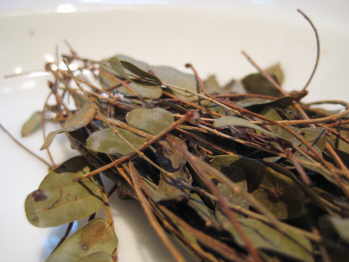 BACKGROUND INFORMATION ON TAMARIND LEAF AS A MEDICINAL HERB:-

Tamarind is probably better known for its culinary uses where it is used as a souring agent but it also has medicinal uses, not only in Ayurvedic medicine but in Afro Caribbean and South American cultures too.

The leaves are used to brew an infusion which is astringent and antiseptic. Its astringency makes it an excellent but gentle laxative. It is considered to be a blood purifier ( an ambiguous term which really means nothing at all) but a poultice made of the simmered leaves is great for sprains and swelling.

TRADITIONAL USES OF TAMARIND LEAF AS A MEDICINAL HERB:-

In ayurvedic medicine an infusion is considered a vermifuge, especially effective in the young and it is sometimes recommended for sluggish liver function.

In the Philippines, the leaves have been traditionally used in herbal tea for reducing malaria fever (again its astringency is the reason why)

An infusion left to go cold and strained can be used as an effective eye wash.

In culinary terms it is the dried fruit pods that are best known but the leaves are added to fish dishes in Southern Indian cuisine, where the sourness, which is not so pronounced in the leaves as the fruit, adds its special character to the dishes.