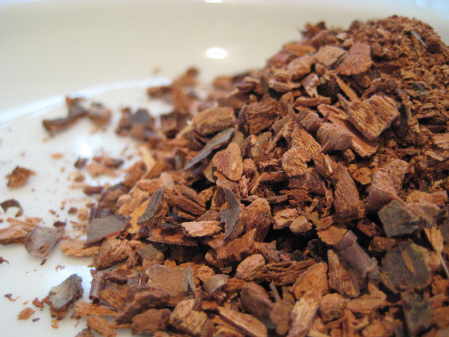 Wild Cherry Bark (Prunus serotina) commonly and variously called Black Cherry, Wild Black Cherry, Rum Cherry, or Mountain Black Cherry, is a woody plant species belonging to the genus Prunus. This cherry is native to eastern North America from southern Quebec and Ontario south to Texas and central Florida, with disjunct populations in Arizona and New Mexico, and in the mountains of Mexico and Guatemala.

Beneath a Wild cherry root’s dark outer covering, the interior is a dusky reddish colour. It has an almond-like aroma that evaporates when dried, but re-emerges when the bark is crushed or dissolved. Its tastes astringent and bitter. Its chemical constituents include cyanogenic glycosides, starch, resin, tannin, gallic acid, fatty matter, lignin, red coloring material, as well as calcium, potassium, and iron salts.

Wild Cherry Bark has a strong sedating effect on the cough reflex and is particularly useful to treat dry, nonproductive coughs in respiratory conditions. Because of its antispasmodic qualities, it has been used with other herbs to treat asthma. It is given for spasmodic cough to enhance relaxation and resting or at night to reduce cough and enhance sleep. Its astringent properties make it useful as a bitter, taken to stimulate sluggish digestion and the appetite. A cold infusion of wild cherry bark has been noted to soothe eye inflammation.

Wild Cherry Bark is collected in the autumn by carefully stripping away small sections. The outer wild cherry bark is then removed and the lighter coloured, reddish interior cortex is dried, but not in direct sunlight. Once thoroughly dried, it must be stored in airtight containers away from light.

A cough remedy is made by dissolving around 100 grams of the bark in 100ml of water for several hours. The solution is then strained, and honey is added to sweeten to taste. Boiling cherry bark is not recommended since this decreases the medicinal properties. Wild Cherry Bark can also be used to make a tincture and lozenges.