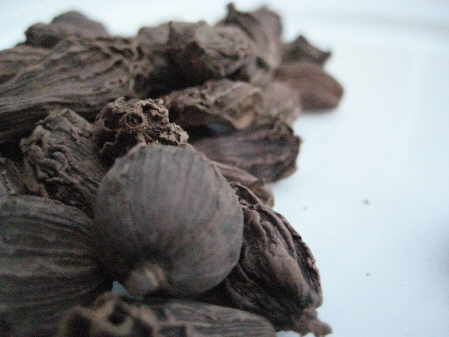 Black Cardamom Pods – or Amomium subulatum / Amomium Tsao ko is also known as Brown Cardamom, Hill Cardamom, Bengal Cardamom, Greater Cardamom, Indian Cardamom, Nepal Cardamom, or Winged Cardamom. It  is a plant in the family Zingiberaceae. Its pods are used as a spice, in a manner similar to the green Indian cardamom pods, but it has a very different flavour so it can not be substituted in the same recipes unless the different flavour is acceptable. It is a flavour recognisably as Cardamom but has a distinctly smoky character.

Its strong smoky flavour and aroma is derived from the traditional drying procedure, which involves drying over open flames.

There are at least two distinct species of black cardamom: A. subulatum (also known as Nepal cardamom) and A. tsao-ko. (and this product)

In India, black cardamom seeds are an important component in some versions of Garam Masala.

In China, the pods are used for long-braised meat dishes, particularly in the cuisine of the central-western province of Sichuan.

Black cardamom is used for warming stews and similar dishes. Although the flavour differs from the smaller green cardamom, black cardamom is sometimes used by large-scale commercial bakers because of its ease of harvest and sometimes lower cost.

Black cardamom is often and wrongly thought of as an inferior substitute for the better known green or white cardamom by those un vesed with this particular spice. As it happens it is better suited to warming savoury dishes rather than the multiple use of green cardamom in both savoury and sweet dishes.

In China, the pods are used for braised meat dishes called Jin Jin, particularly in the cuisine of the central-western province of Sichuan. The pods are often used in Vietnam, where they are called thảo quả and used as an ingredient in the broth for the noodle soup called phở.

Most Black Cardamom is produced in Nepal followed by Bhutan and India but the recent serious earthquakes in that region has seen crop failure or destruction and the price has soared as a result.

In traditional Chinese Medicine, Black Cardamom is used for stomach disorders and for combating Malaria