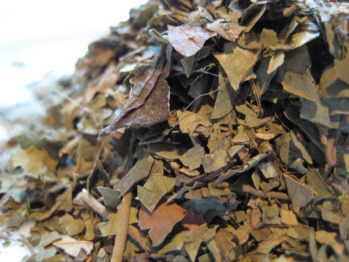 Also known as Periploca of the Woods, Ram’s Horn or, in Sanskrit, Meshasringi and in Hindi, Gurmar

Gymnema is a Central and Southern Indian indigenous forest climbing vine, somewhat woody in its nature but the leaves of which are used to suppress the taste of sweetness. It is also known as Periploca of the Woods, Ram’s Horn or, in Sanskrit, Meshasringi and in Hindi, Gurmar

Chewing the leaves (rather in the manner of chewing Betel), tends to suppress our ability to register the sweetness of anything else.

Despite the part used being the leaf, one of its common names is Miracle Fruit which is a name shared by two other completely unrelated species Synsepalum dulcificum and thaumatococcus daniellii.

Gymnema continues to be studied in great detail but it is demonstrably clear that it reduces the taste of sugar when it is placed in the mouth. This is probably due to the isolated glycosides known as gymnemic acids, which exhibit anti-sweet activity. This effect lasts anything up to about 2 hours.

The active ingredients are thought to be the family of compounds related to gymnemic acid: purified gymnemic acids are widely used as experimental reagents in taste physiology and have also an anti-diabetic effect in animal models, reduce intestinal transport of maltose in rats when combined with acarbose, and reduce absorption of free oleic acid in rats.

There really is a great deal more research that needs to be done.