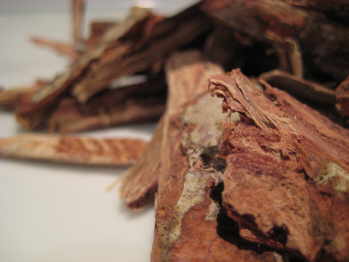 Hogs Plum (Spondias mombin) is a native tree to the tropical Americas but includes the West Indies and from there it has now been has been naturalised in parts of West Africa, India, Sri Lanka and Indonesia. It is rarely cultivated.

Much of the tree’s material is used in either culinary or medicinal terms, the fruit (which is rich in in vitamins B1 and C.) but often infested with fruit worm, is specifically fed to children in India simply because of its high vitamin content. This product ( the bark of the tree ) has traditional medicinal uses where it is most well known and popular in South America and West Africa and not quite as well known throughout the Caribbean.

Hog plum is antibacterial, anti-viral, a sedative, and an anti-oxidant. The bark has also proven to be anti-inflammatory and has anti-spasmodic properties.

it is chiefly used as an infusion to help with female reproductive problems. It is a staple for traditional midwives, in particular, in treating bleeding in childbirth and for menstrual bleeding and related conditions.

The liquor made from the infusion is used topically to treat a range of skin problems including ulcers, rashes, psoriasis and mild wounds. The bark is also considered to be of use in malaria, bronchial coughs and fevers.

In West Africa hog plum is used for a wide variety of health conditions, including bronchial coughs, fever, mild eye irritations and infections, as a stomachic and as a diuretic. The bark is also used to treat uterine problems including cancer although no reason to believe any effect on cancer can be achieved – such use is largely traditional and backed by no serious research.

In the Caribbean an infusion of hog plum bark was once used to treat gonorrhoea (with no success at all one would imagine) but is still used to effectively treat diarrhoea, dysentery, and as in West Africa, an eyewash for mild eye irritations and infections. A poultice of the hog plum is used to treat sores.