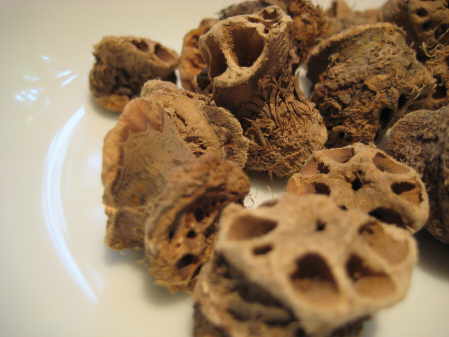 The Botanical Name for Blue Lotus Root is Nelumbo nucifera. It is also known as Indian Lotus, Sacred Lotus, Bean of India or just simply Lotus and despite what people think, the flower of the plant which is what people most associate with the name Lotus isn’t blue at all.

It is an aquatic plant as most people know and its seeds may remain viable for many years, with the oldest recorded lotus germination being from that of seeds 1,300 years old recovered from a dry lake bed in northeastern China!

The roots of the plant contain asparagines, tannin, nelumbine, carotene, thiamine, nicotinic acid, riboflavin, and ascorbic acid (vitamin C)vprotein and carbohydrates, and the minerals potassium, calcium and phosphorous, iron and calcium among other constituents.

Mostly used as a food source or medicinally as a tincture, the raw root dried is used only by well trained and practising herbalists and in ritual for its sacred buddhist associations.

The dried root is not an all season substitute for the fresh root which can be prepared in many ways – not least as a pickle.

Some of the traditional claims for Lotus are that it is said to provide better assimilation of other herbs, and an enhanced response to any form of healing. It is used to help energise the heart, liver, spleen, kidneys and intestines, for tissue regeneration, to slow the ageing process, and is used as a general cleanser for the whole system.

Spiritually Blue Lotus Root is also believed by many to heighten creative ability and mind power, and induce a sense of ease and peace!