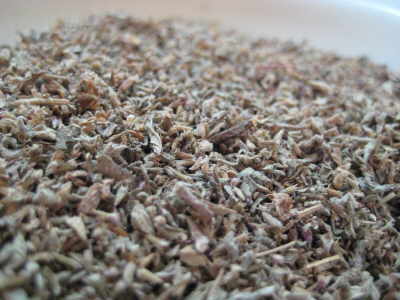 Pregnant women should not ingest this herb nor use the essential oil.

Pennyroyal (Mentha pelegium) is a member of the mint genus; an essential oil extracted from it is used in aromatherapy. The Herb has a long traditional folk medicine history of use in inducing abortions as it is an abortifacient. Abortifacient oils in this class are high in pulegone, a highly toxic volatile, which can stimulate uterine activity.

It does happen to make the most delicious cup of minty tea though, subtle and complex rather than raw.

Traditional Uses and Cautions of Pennyroyal:-

The infusion made from the herb has been traditionally employed as an emmenagogue to promote menstrual flow, and as an abortifacient to initiate self-abortion. An Infusion may safely stimulate mild increase in menstrual flow, but the oil (being so very much stronger and concentrated) is very different and can be used to induce abortion. However this is no recommendation and should not be used to self-abort since complications can always occur: in 1978, a pregnant woman died after consuming two tablespoonfuls (30 ml) of Pennyroyal oil, and in 1994, another death occurred after a pregnant woman (attempting to self-abort, but with an unknown ectopic pregnancy) consumed tea containing Pennyroyal extract. The herb is quite safe providing you do nt take excessive doses of it.

The oil or an infused oil made from the herb is also used as a flea repellant for pets. This latter usage is the origin of the plant’s Latin species name, the flea being Pulex irritans. However the distantly related American Pennyroyal or Hedeoma pulegioides is the source of much of what is called pennyroyal oil.

Sprinkling the dried form of the herb is also known to repel spiders. The essential oil can also be used to deter ants.

The term Pennyroyal (or Pennyrile, from a dialectal pronunciation) is also used to describe a geographic province of western Kentucky where the above-described herb grew in profusion sufficient to lend its name to the whole area.