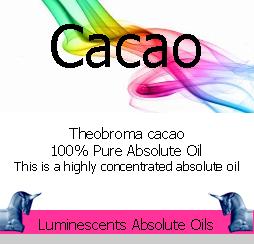 SCENT: Cacao absolute is heavenly if you like the deep intoxicating aroma of chocolate with an almost alcoholic element

Cacao from which Cacao Absolute Oil is extracted is also known as Cocoa, and is a small evergreen tree in the family Sterculiaceae (alternatively Malvaceae), native to the deep tropical region of the Americas. Its seeds are used to make the cocoa powder and chocolate that the world loves so much.

There are two prominent competing hypotheses about the origins of the domestication of the originally wild Theobroma cacao tree. One is that wild examples were originally distributed from southeastern Mexico to the Amazon basin, with domestication taking place both in the Lacandon area of Mexico and in lowland South America. But recent studies of Theobroma cacao genetics seem to show that the plant originated in the Amazon and was distributed by humans throughout Central America and Mesoamerica.

Each seed within the pod/bean contains a significant amount of fat (4050%) as in cocoa butter. The most noted active constituent is theobromine, a compound similar to caffeine. \theobromine is toxic to dogs which is why you should never give a dog a chocolate made for human consumption – Dog chocolates have the theobromine extracted.

Used in perfumery but is more suitable to water based applications as it is NOT oil soluble.

The scientific name Theobroma means “food of the gods”. The word cacao itself derives from the Nahuatl (Aztec language) word cacahuatl, learned at the time of the conquest when it was first encountered by the Spanish. Similar words for the plant and its by-products are attested in a number of other indigenous Mesoamerican languages.