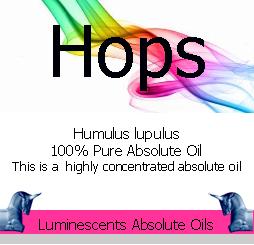 SCENT:The Hop has a warm, spicy aroma. The undertones will remind many of beer.

Hops or more properly the Hop is a small genus of flowering plants, native to the temperate Northern Hemisphere. The female flowers, commonly called Hops, are used as flavouring and stabilisers during beer brewing.

The Hop is well known for its perfumery and food applications. Nonetheless, it has some very distinct aromatherapy benefits. Paramount on the list is the Hops’ ability to perform as a sedative. This makes it perfect for insomniacs and those suffering through nervous stress.

The Hop is not typically blended.

History of the Hops:-