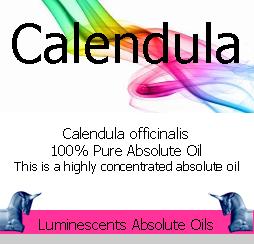 SCENT: Calendula has a very rich and balsamic aroma

Calendula officinalis or the flowers of the Marigold as it is popularly known and from which Calendula Absolute Oil is extracted is taken only from the flowers using a food grade solvent whereas the commercial oil is obtained from the whole plant, including the seeds.

A soothing oil used in creams, oils, and powders for babies. Skin fresheners, hair preparations, lotions, suntan gels, greasy skin. It is especially good as a remedy for the itchiness and discomfort of psoriasis and eczema although this oil is mainly used in the highest quality perfumes.

Calendula Absolute Oil has been considered beneficial in reducing inflammation, wound healing, and used as an antiseptic.