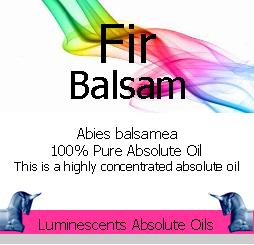 Abies balsamea, from which Fir Balsam absolute oil is obtained is a North American fir, native to most of eastern and central Canada (Newfoundland west to central British Columbia) and the northeastern United States (Minnesota east to Maine, and south in the Appalachian Mountains to West Virginia).

The Balsam fir is a small to medium-size evergreen conifer which can grow up to 20 metres in height with a narrow conic crown. The bark on young trees is smooth, grey, and with resin blisters (which tend to spray when ruptured), becoming rough and fissured or scaly on old trees.

The leaves are flat and needle-like, 15 to 30 mm  long, dark green above often with a small patch of stomata near the tip, and two white stomatal bands below, and a slightly notched tip. They are arranged spirally on the shoot, but with the leaf bases twisted so that the leaves appear to be in two more-or-less horizontal rows on either side of the shoot. The seed cones are erect, 40 to 80 mm long, dark purple, ripening brown and disintegrating to release the winged seeds in September.