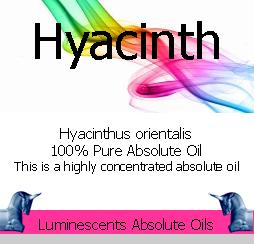 SCENT: Hyacinth has a very complex floral base and is intensely sweet, green and floral.

CONSISTENCY: Can vary between medium to viscous especially when cold

Hyacinthus orientalis, from which Hyacinth Absolute Oil is extracted, is also known as the Common Hyacinth, Garden Hyacinth or Dutch Hyacinth. It is known and loved by many for its extreme and strongly floral aroma and is a native of South West Asia, Turkey, Syria, The Levant and Israel but now, due to its popularity, is grown absolutely everywhere it will tolerate. It was introduced to Europe in the 16th century. It flowers naturally early and can be forced to flower even earlier often being forced for Christmas flowering.

All parts of the plant are toxic but the bulb, in particular, is extremely so and no part of the plant should ever be ingested.

One would think that its overt popularity would mean that an absolute oil made from it which captures the very essence of the floral aroma would be fairly common to find but actually its one of the rarest oils to be found. Hence its expense. It has not been made in Europe since the 1930’s although there have been some very small artisan makers still in existence. Most is made in China now – This oil is from France where production has started again in small quantities where it has been absent as we’ve stated since the mid 1930’s.

Synthetic Hyacinth oil has been used since the middle of the 20th Century for designer perfumes as the very best is so true to form and accurate in its aroma and far less expensive.

The absolute oil has no known aromatherapy benefits and is most often used in high grade perfume manufacture.

Hyakinthos, after whom the flower is named, was, in Greek mythology, admired by the Gods Apollo and Zephyr but in a rage a fight broke out between the two Gods for his favour and he was killed by a discus, The Hyacinth flower sprang from his spilled blood and named after him by the remorseful Gods.

Theophrastus, a Greek native of Eresos in Lesbos who was the successor to Aristotle describes a wild and cultivated Hyacinth but current  thinking does not subscribe to the likelihood that it is the modern Hyacinth we now know and love so much.