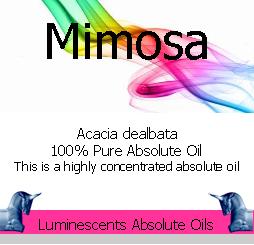 SCENT: Mimosa is woody and floral, rich and exotic.

Mimosa , sometimes known as Black Wattle is an attractive small tree up to 40 ft. high, having a greyish-brown bark with irregular, longitudinal ridges, delicate foliage, and clusters of extremely fragrant bright yellow flowers. A concrete and absolute is obtained by solvent extraction from the flowers and twig ends.

Like many other perfume plants, the Acacia, a native of Australia, was brought to Europe as an ornamental plant in the early part of the 19th century. The tree is used in Australia as a tanning material.

It is an astringent, antiseptic. De-stress. Relaxing, calming and has been used in skin care for oily, sensitive skin and for general skincare. It is also and primarily used in perfumery

The bark – wattle bark – is used in tanning of leather, and an extract is used for diarrhea and astringent gargle.. Nowdays it is most often used in aromatherapy for cases of anxiety, nervous tension and over-sensitive stress disorders but is primarily used as a fixitive in soaps and high class perfumes.