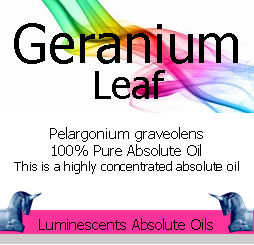 SCENT: Geranium Leaf absolute has a scent that is both sweet and herbaceous, while carrying some subtle notes similar in character to Rose.

Geranium Leaf Absolute Oil is made from Pelargonium graveolens which a hairy perennial shrub, often used in hedgerows, and stand up to about one metre high with pointed leaves, serrated at the edges and has pinkish-white flowers. It is a native of The Cape and Northern Territories of South Africa.It is sometimes called Sweet Scented Geranium.

It is a favourite amongst aromatherapists who often blend it with lavender although this absolute is more often used in perfumery than aromatherapy for its finer and stronger fragrance.

This calming and serene oil has a great all-over balancing effect and this extends to the skin – where it helps to create balance between oily and dry skin, emotions – where it helps to relieve feelings of stress and anxiety, and the hormone system. The strong smell is particularly used to ward off mosquitoes and the oil massaged into the scalp is used against head lice. In massage it is perceived to be assist with fluid retention and help fight cellulite.

It is considered astringent, haemostatic, diuretic, antiseptic, anti-depressant, tonic, antibiotic, anti-spasmodic and as an anti-infectious agent.

The plants originated from South Africa as well as Reunion Island  (hence its Bourbon name) , Madagascar, Egypt and Morocco and was introduced to European countries such as Italy, Spain and France in the 17th century. The Greek pelargos means “stork” A common name for Pelargoniums is Storksbill or Cranesbill due to the shape of their fruit. The specific epithet “graveolens” refers to the strong-smelling leaves