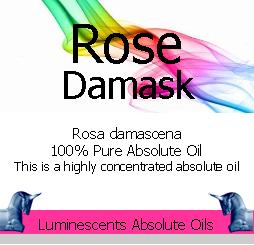 SCENT: Rose Damask is a very complex, sweet floral scent which is highly prized, much cherished and considered to be the finest of all the rose oils. Its reputation of being a must ingredient in perfumes is well deserved.

The Damask Rose (or Damascene Rose if you prefer) from which the Rose Damask Absolute Oil is obtained is one of the worlds best known flowers – stunning and exotic in both visual appearance and aroma.

Rose Damask is a very common Absolute oil in the perfume and aromatic industry. Aromatherapists also credit it with being an exotic aphrodisiac, as an emollient in skin care products, and as a balancer of the spirit.

Rose Damask is a fertile hybrid of Rosa gallica with either Rosa phoenicia or Rosa moschata, and has been popular since antiquity. It is thought that the hybrid first arose in Anatolia several millennia ago. Damask rose (or, in any case, roses very similar to today’s Damask rose) were known in Western Asia since the Bronze Age, and its cultivation later spread to Greece and Rome.

Rose Damask is the dominant source of rose oil, although in the European middle ages, rose oil was obtained from R. gallica flowers. In France and North Africa, rose oil is still obtained from R. centifolia and centifolia-gallica hybrids as well as the Damascene rose. The rose mentioned in the Capitulare de villis of Charlemagne is probably dog’s rose, R. canina. In China, native rose species (e.g., R. rugosa) have been used as source for floral scents in perfumery and for producing rose-flavoured black tea.