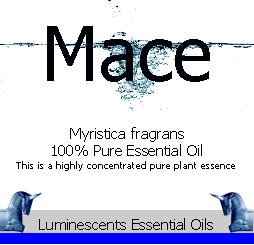 SCENT: Mace essential oil is rich, spicy, sweet, woody. It is similar to the cooking spice, but richer and more fragrant.

Mace Essential Oil is derived from the evergreen Nutmeg tree capable of growing up to 20 metres in height. It produces a fleshy red fruit. The exterior husk is dried and produces the spice,Mace, the distillation from which produces this Mace essential oil, while the seeds themselves produce the Nutmeg essential oil.

The tree indigenous to the Banda Islands in the Moluccas otherwise known as the Spice Islands of Indonesia where it is known as Pala.

It is now widely grown throughout the Caribbean, India, Malaysia and there are several different species. It is the only tropical fruit that is the source of two spices from the same tree, Nutmeg and Mace.

Mace along with Nutmeg was used by the Indians for intestinal disorders, by the Egyptians in embalming and by the Italians during the Plague. In the Middle Ages Mace and Nutmeg were grated and mixed with lard as an ointment for piles. Mace oil less often used in soap, candle making, dental products and hair lotions than its relation Nutmeg but the spice is considered much finer.

CAUTIONS:If used in large amounts, can cause toxic symptoms such as nausea and tachycardia.