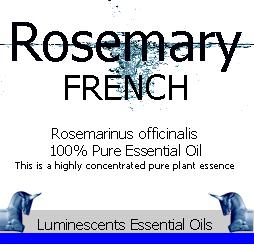 Rosemary French is distilled from is an evergreen shrub with numerous branches; ash-coloured scaly bark and leathery, thick leaves, which are lustrous and dark green above, and white underneath. Rosemary French is the first choice for Rosemary Essential Oil if looking for an oil that is less camphoraceous than Spanish or Tunisian.

Rosemary is best-known for its use as facial oil for extremely dry skin. Rosemary essential oil nourishes the scalp and keeps hair looking healthy and shiny. Many users claim that it promotes hair growth, though there is no medical evidence to support this argument. This essential oil is reported to balance intense emotions and control mood swings. It is reported to lift the spirit and counter depression assisting in managing stress and overcoming stress-related disorders and nervous exhaustion.

Because it often grows in proximity to the sea, its name means Dew of the Sea. Its leaves were traditionally burned in hospitals to purify the air. Rosemary was used as incense by the ancient Romans and according to legend, Mary sheltered the baby Jesus under a rosemary bush.

Not suitable for people with epilepsy or high blood pressure.