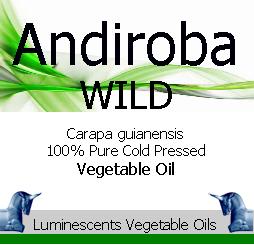 OTHERWISE KNOWN AS: Crabwood and sometimes, quite incorrectly, as Mahogany Oil

AROMATIC: Andiroba oil has very little scent characteristic of most cold pressed vegetable oils but as with all untreated oils has a slightly fatty note.

SHELF LIFE: Andiroba oil is slow to go rancid; users can expect a shelf life of 6 Months to 1 Year with proper storage conditions (cool, out of direct sunlight). Refrigeration after opening is recommended.

Andiroba Oil ( Carapa guianensis ) is processed from the seeds or nuts of the Amazonian tree, Carapa. It belongs to the same family as Mahogany and is sometimes known as Crabwood

The native Indians of the Amazon have used andiroba oil for centuries as a natural insect repellent and chemical analysis has identified the presence of a group of chemicals called limonoids.

The anti-inflammatory and insect repellent properties of andiroba oil are attributed to the presence of these limonoids, including a novel one which has been named ( naturally) andirobin. It is this that gives the oil its slightly fatty smell.

It is used for insect bites and stings; as an insect repellant; for psoriasis, dermatitis, heat rash, skin fungi, and other skin problems; for skin parasites and more recently for toning the skin after skin cancer.

The indigenous peoples in the Amazon have used andiroba in many ways for centuries, and virtually all parts of the tree, as well as the seed oil are utilised. The Munduruku Indians traditionally used the oil for the mummification of human heads taken as war trophies. The Wayãpi, Palikur, and Creole Indian tribes have used andiroba oil to remove ticks from their scalps, for other skin parasites, and even in the process of tanning animal hides. The indigenous tribes of Northwest Amazonia brew the bark, and sometimes the leaves, into a tea for fevers and intestinal worms; they also apply this tea externally for ulcers, skin parasites, and other skin problems. Indians have also used the oil as a solvent for extracting the plant pigments and colourants with which they paint their skin. Several Indian tribes in the Amazon combine andiroba oil with the reddish-orange pigment extracted from annatto seeds. They rub the oily bright orange paste all over their bodies and even into their hair to protect themselves from biting insects and to repel rain water.

Andiroba oil burns well and is used as a natural lamp fuel in the rainforest. In the early 1800s, the street lamps of Belém Brazil were fueled with andiroba oil. Not only does it burn cleanly with little smoke but it also repels mosquitoes, flies, and other pests. Traditional forest dwellers and river people in Brazil called caboclos make a medicinal soap using crude andiroba oil, wood ash, and cocoa skin residue. This soap is especially recommended for the treatment of skin diseases and as an insect repellent. They also apply andiroba oil directly on joints to relieve arthritis pain and mix it with hot water and human milk and drop it into the ear for ear infections. To aid digestion, the bark is soaked in water for a day and 1 cup is taken before meals.

Many of these uses continue today in the Brazilian herbal medicine systems. Andiroba oil is used by Brazilian city dwellers either in pure form or mixed with other oils or natural products. They apply it externally to wounds and bruises, use it as a massage oil and natural insect repellant, and employ it topically for many skin diseases and conditions, including psoriasis. Andiroba is also still widely used as an insect repellent and for treating insect bites for both people and animals.

The oil is commercially manufactured into anti-inflammatory, antibacterial, antiarthritic, and insect repellant soaps as well as turned into candles that are sold as natural insect repellents. The oil is also used in Brazil as a furniture polish that is thought to protect wooden furniture from termites and other wood-chewing insects.

It is not generally used in aromatherapy but it is richly emollient and is extremely nourishing for the skin. Along with ts reported insect repellent capabilities it has several massage benefits. Apply directly to skin as desired.