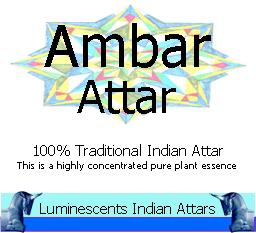 Ambar Attar is sweet and resinous with gorgeous underlying woody sandalwood chords. Its principal aromatic ingredients are Pinus succinifera from which Crude Amber essential oil is obtained which is from a large and now extinct pine tree from which many modern trees owe their decendency and Sandalwood (Santalum album)

Attars, and Ambar Attar in particular, by their very nature are expensive – why? The ingredients used are some of the most expensive in the world.

The Oudh Attar lasted three days on me and I shower at least once every day! The Ambar lasted just a day.

Crude Amber Essential Oil is one of the oldest oils in the world, its use as a trading commodity dates back to 8000 BC. Amber has had various names down the centuries, which includes, ‘Sunstone’, ‘Stone of victory’, ‘Adornment of the daughters of Rome’, and ‘Gold of the North’. Its English name derives from Ancient Arabia where it was burnt as incense and was known as ‘Anbar’ or ‘Ambar’.