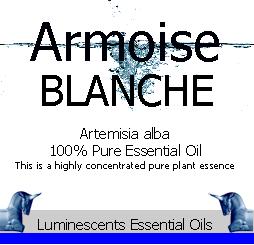 Armoise Blanche (Artemisia alba) is native to the Mediterranean region, Northern Africa, Western Asia and Southwestern Europe, and also in the Arabian peninsula and The Saharan Maghreb.

The leaves, in particular, are very strongly aromatic and covered with fine glandular hairs that reflect sunlight giving a grayish white aspect to the shrub. The leaves of sterile shoots are grey, they are petoliate, ovate to orbicular in outline; whereas, the leaves of flowering stems, more abundant in winter, are much smaller.

Also known as White Mugwort. Alba simply means white and it is sometimes known as Herba Alba meaning White Herb. In France it is known as Armoise Herbe Blanche or just Armoise Blanche and in Arabic it is known as Shieh. In the Old testament it is this particular Artemisia which is referred to as Wormwood and confusion arises as a result as it can be confused with Artemisa absinthium in texts which is otherwise known as Grand Wormwood