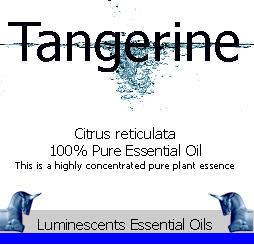 SCENT: Tangerine essential oil has the typical citrus scent  fresh, radiant, and tangy sweet. With only subtle differences, it smells a lot like the Mandarin, with some even considering them identical. In comparison to Sweet Orange, Tangerine can be seen as lighter and finer.

The Tangerine tree was originally native to China, but is now grown predominantly in the United States and Sicily. The tree is also very similar to the Mandarin to which it is closely related. In fact in many parts of the World The fruit is known as a Mandarin.

The essential oil, like most of the citrus family, can be depended upon for refreshing and rejuvenating characteristics. Its aroma clears the mind and can help to eliminate emotional confusion.

Aromatherapists also consider it to be very comforting, soothing and warming. It is used in many perfumes, soaps, as it is considered to have a finer fragrance than either Oranges or Mandarins. It is also an antispasmodic, carminative, digestive, diuretic, sedative, stimulant (digestive and lymphatic), and tonic agent.

Tangerines were originally brought to Europe and then the United States via China. The name was first used for fruit coming from Tangier in Morocco and described originally as a mandarin variety

Tangerine is similar to other essential oils in the citrus family in that it can be phototoxic. Care should be taken not to expose the skin to sunlight after a treatment.