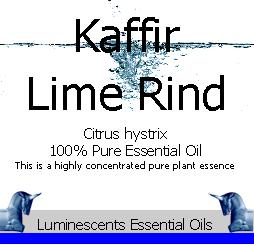 SCENT: The Essential Oil has a light citrus like and green aroma

Use well diluted as it can cause skin irritation due to photo-sensitivity issues as with all citrus oils. Avoid during pregnancy. As with all essential oils, they should not be used during pregnancy and never ingested (taken internally) and should be kept away from children and pets. No medicinal claims are made for this product and the notes above are provided for guidance purposes only. Essential Oils are powerful plant extracts and should be used with extreme caution. You should seek the advice of a qualified practitioner should you be in any doubt.

The Kaffir lime from which Kaffir Lime Rind Essential Oil is derived is native to Indonesia but widely grown worldwide as a backyard shrub. Its actually quite easy to grow. The oil is also known as Combava Essential Oil.

It is an extremely thorny bush with very aromatic leaves. The oil from the rind of the rough, bumpy fruit has strong insecticidal properties. Well suited to container growing. The green lime fruits are distinguished by their bumpy exterior and their small size (approx. 4 cm wide), and the hourglass-shaped leaves (actually, the leaf and the leaf-shaped stem or phyllode) are widely used in Cambodian, Thai, and Lao Cuisine. It is now widely available throughout the world as a culinary additive but still expensive as the leaves do not have a long shelf life and do not travel particularly well.

Kaffir Lime leaves are popular in Cambodia, but less so in Vietnam. Malay, Burmese and Indonesian cuisines use them occasionally with chicken and fish.

The leaves can be used fresh or dried, and can be stored frozen.

Although the most common product of the Citrus hystrix tree is its leaves (which impart a sharp lime/neroli flavour to Cambodian base paste known as Krueng, Thai dishes such as Tom Yum, and to Indonesian food such as Sayur Assam – (literally sour vegetables), the juice and rinds of the small, dark green gnarled fruit, known as Jeruk Obat ( literally medicine citrus) are used in traditional Indonesian medicine.

As for the zest, it is widely used in creole cuisine and to impart flavour to “arranged” rums in the Réunion island and Madagascar.