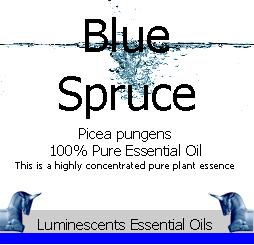 SCENT:Blue Spruce essential oil is rarer than the black or white spruce. It is sweeter, and softer than most evergreen oils with a balsamic, resinous odour with green woody  notes. Overall, the scent is very clean, fresh and pleasant.

Blue Spruce is also known as Colorado Blue Spruce, Colorado Spruce, or Green Spruce, is a native to the Rocky Mountains. It is widely grown as an ornamental and is distributed throughout the world as such. It is the Spruce which is usually sold as a Christmas tree.

The essential oil has a very pleasant scent, and can be used by aromatherapists in baths to revive tired muscles. It will also be seen frequently used in room sprays, detergents, and in cough and cold preparations as a diffusing oil and an inhalant.

Blue Spruce Needle Essential oil has a shorter history than the Black or White Spruce of use in saunas, steam baths, and as an additive to baths and massage products in spas. A particular strength of this essential oil is its ability to target sore muscles and to re-energize or invigorate.

The Navajo and Keres Native Americans used this tree as a traditional healing plant and used it in ceremonial functions. The twigs were given as gifts to bring good fortune. In traditional medicine, an infusion of the needles was used to treat colds and settle the stomach ( as they still are)  The resulting infusion was used used externally for rheumatic pains ( and still is )