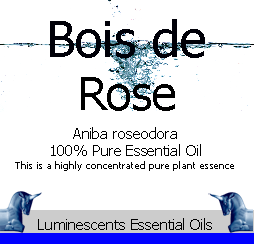 SCENT: Bois de Rose essential oil has a fantastic warm and woody scent, while at the same time being both floral and fruity. Rosewood oil is rich in linalool, a chemical which can be transformed into a number of derivatives of value to the flavour and fragrance industries.

Aniba roseodora is the source of Bois de Rose Essential Oil and from which it is distilled. It is  a small evergreen tree now controlled as an endangered species by the Government of Brazil. It is highly valued and has been over harvested and over exploited and not much cultivated which has led to its endangered status. The Government in Brazil is now trying to cultivate it commercially. It has a reddish bark and heartwood. As a registered endangered species it can only be purchased ethically from Government sponsored auction in Brazil but this oil comes from sustainable sources in India.

Bois de Rose is another name for Rosewood and is a literal transalation. It is the name by which the oil, which is much better known in France and Italy than anywhere else, is generally known throughout the perfume industry.

It is often, because of the name, been confused with species of Dalbergia which is variously known as Brazilian Rosewood (Dalbergia nigra) or Indian Rosewood (Dalbergia latifolia) both of which are on the CITES register of endangered species too but have never been the source of the Essential oil of Rosewood and are not related at all. Rosewood Essential Oil comes ONLY from Aniba roseodora.

Bois de Rose has been introduced to aromatherapy only recently.