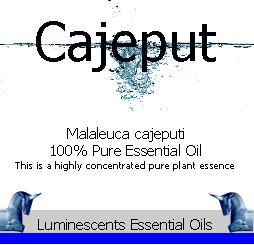 SCENT: Cajeput Essential oil has a fresh, camphorous aroma with a slight fruity note. The odour of the oil has been stated to resemble the combined fragrance of camphor, rosemary, and cardamom.

Malaleuca leucadendra cajeputii from which Cajeput Essential Oil is distilled is a small Australian tree with an erect but crooked trunk; a soft, thick, spongy, whitish, ash-coloured bark; and scattered branches, with the slender twigs often drooping as completely as in the weeping willow (Salix Babylonica). The leaves are alternate, most frequently vertical, short-stalked, narrow- lanceolate, while young, sericeous, sometimes slightly falcate, entire, from 3 to 5 inches long, and from 1/2 to 3/4 of an inch broad; and very aromatic when bruised.

Used chiefly as a local application in skin disease and as a stimulating expectorant. It is mildly analgesic, antimicrobial, antineuralgic, antispasmodic, antiseptic (pulmonary, urinary, intestinal), carminative, febrifuge, insecticide, sudorific, tonic. It is used as an insect repellent with some success but can cause skin irritation if used in high quantity.