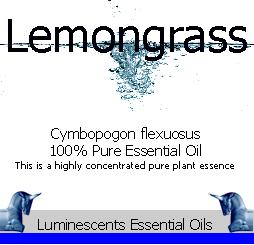 SCENT: Lemongrass Essential Oil has an extremely strong, lemon like and herbaceous aroma.

Lemongrass is a fragrant perennial plant that grows to around 30-50 cm (12-20 inches). It has red coloured stems and fast growing grass like leaves that are used in distillation.

Research has found that lemongrass holds antidepressant, anti-oxidant, antiseptic, astringent, bactericidal, fungicidal, nervine and sedative properties. It also can be used as a deodorant and body tonic. Lemongrass is very helpful for treating certain skin conditions such as acne, rough skin patches, open pores and the like. Many have found that adding a few drops to skin treatment products had greatly enhanced them. Skin oils may also be made by mixing lemongrass with sweet almond or jojoba oil.

It is a strong antiseptic and bactericidal properties mean it has been used in Indian medicine for thousands of years to fight infectious diseases and fevers. As part of a traditional Indian medicine, Ayurveda, lemongrass was used for soothing fevers and various illnesses. It is a great ‘tonic’ of an oil because of its stimulating effect on the whole system. It seems to have a sedative effect on the central nervous system. This oil will also deodorize quite naturally and is very effective with sweaty feet, as it seems to help balance the oil production in the feet.

Cymbopogon includes more than 30 perennial tropical grass species with mostly lemon scented foliage. Lemongrass is cultivated for the edible stem and for the essential oil. It is native to India and is now heavily grown and oil produced in the West Indies, Africa and parts of tropical Asia.

It is used as flavouring for food, alcoholic and soft drinks, a compound in soaps, detergents, perfumes and cosmetics. The fresh leaves have been traditionally used in Thai, Vietnamese and Caribbean cooking for many years. The herb is frequently used in curries as well as in seafood soups. The light lemon flavour of this grass blends well with garlic, chilies, and cilantro. This is a very pungent herb and is normally used in small amounts. It is also used to make herbal teas.