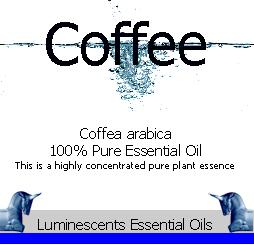 SCENT:  Coffee essential oil has an aromatic and warming aroma.

Coffee essential oil is a warm and comforting aromatic oil with honeyed undertones, similar in scent to Cedar wood Virginian, but with a more lingering richness and exotic complexity and, of course, coffee itself.

Used in Aromatherapy for mental clarity, sluggish digestion, and convalescing from debilitating illness.

Cedarwood Atlas, Clove bud, and Blood Orange for digestion insufficiencies. With Rosemary, Basil and Lemon for Mental clarity. And with Frankincense, Ginger grass, and Lime for recovery.

The Bean became popular throughout the known world between the 11th and the 17th Centuries but not as you might imagine. It wasn’t as a beverage that it was first introduced but as a food stuff and medicinal herb. The leaves were made into a poultice and used to ease away muscle and joint aches. Even alcoholic drinks were made from it at the time.

Coffee seems to have originated in East Africa – Ethiopia, Somalia, Eritrea and Arabia where the bitter black juice extracted from the toasted beans was used to revitalise travellers. Monks would sip the bitter juice throughout their daily devotions.

In the 18th century, Captain Gabriel Mathieu Desclieux in the French Army sailed for Martinique with a shrub from King Louis XIV’s personal tree. A few decades later there were estimated to be near on twenty million shrubs growing on there.