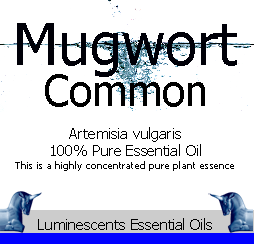 Common Mugwort (Artemisia vulgaris) is an aromatic perennial herb having red-purple stems and deeply cut, dark green leaves with white undersides. Panicles of tiny red-brown flowers appear in summer. It is a tall-growing plant, the stems, which are angular and often of a purplish hue, frequently rising 3 feet or more in height.

It is antiseptic, antispasmodic, carminative, choleretic, diaphoretic, diuretic, emmenagogue, nervine, orexigenic, stimulant, stomachic, tonic (uterine, womb), vermifuge. It is known to be used to expel worms, control fever and as a digestive remedy.

It is an ancient herb, once considered to contain magical powers as a remedy for illness and disease. Most often used as a seasoning for wild game, meat and fish, Common Mugwort is a narrow, leafy plant with pointed leaves that are green on one side and pale white on the other. The plant grows several feet in height with a stem that is reddish tan in color. When added to foods, Common Mugwort provides a somewhat bitter flavor to the item being seasoned, such as meat stuffings, dumplings and similar foods. Familiar in Asian food dishes, Common Mugwort is blanched or stir-fried to be added to soups, salads, and a variety of rice dishes.

Also known as Felon Herb and St. Johns’ Plant or Armoise. In Europe the herb has been used in association with superstition and witchcraft and was seen as a protective charm against evil and danger. In Chinese medicine the dried, compressed leaves (moxa) are used to briefly warm the skin in case of internal cold. It is named Artemisia after the Greek name for the Goddess Diana.