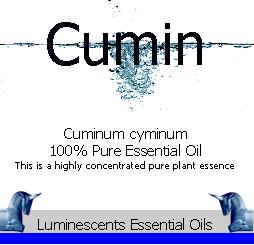 Cuminum cymninum from which Cumin Seed Essential oil is distilled was a native to the Mediterranean area going east to Pakistan. Historically it has been cultivated in the Mediterranean and particularly Iran.  The ancient Greeks kept cumin at the dining table in its own container (much as pepper is frequently kept today), and this practice continues in North Africa today, particularly in Morocco.  Cumin was also used frequently in ancient Roman cuisine. In India, it has been used for millennia as a traditional ingredient.

It is a member of the Parsley family. Cumin is a small annual herb about 50cm ( 20 inches) high with deep green, narrow feathery leaves and tiny white or pink flowers, followed by small oblong seeds.

Known since Biblical times, it was mainly used for its digestive properties. The Egyptians used it for headaches. The Pharisees paid their taxes with it and in the Middle Ages, feudal lords paid serfs with Cumin for services rendered.

CAUTIONS:Cumin has photo-toxic properties and direct sunlight should be avoided after any application. It should also be avoided by those with sensitive skin.