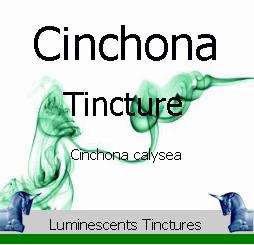 Patients taking cinchona bark must be monitored for quinine toxicity. A condition called cinchonism develops in people who are hypersensitive to cinchona bark alkaloids; symptoms include severe headache, stomach cramps, convulsions, blindness, paralysis and collapse. Large doses of quinine have a depressant effect on the heart, Large doses of 2 g to 8 g can be fatal to an adult. Quinine can interact with prescription drugs.
USE ONLY UNDER PROFESSIONAL GUIDANCE
SKU: BBot 1020a. Category: Tinctures.

The harvested bark of the Cinchona tree (Cinchona calisaya) from which Cinchona Bark Tincture is made, produces several alkaloids, the most important of which is quinine and has certain febrifuge properties causing it to be used in the treatment of Malaria for centuries.

The tree is also known as Jesuit’s Bark or Peruvian Bark.

The medicinally active bark, which is stripped from the tree, dried and sometimes powdered, includes other alkaloids that are closely related to quinine but react quite differently in treating malaria.

Some alkaloids of the Cinchona bark are not soluble in water, but soluble in wine or alcohol, rather,, therefore wine has been used to make an infusion of the bark for ingestion as a home remedy and, of course, tinctures use wood, beet or grain alcohol.

The plants are cultivated in their native South America, and also in other tropical regions, notably in India and Java.