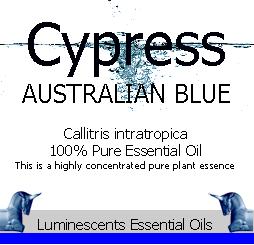 SCENT: Cypress Australian Blue essential oil is sweet, balsamic and spicy. It has a very pleasant Evergreen aroma that is an unusual combination of smoky, woody and dry elements. It also has fruit and slightly nutty tones with comparisons to an exotic Cedarwood.

Cypress Australian Blue, is a slow-growing native Australian cypress tree, exclusive to tropical Australia. The Callitris species are members of the Southern Conifer group of the Cupressacea family, with fourteen species in Australia, and two in New Caledonia. The compact, neat tree, with blue-green foliage reaches heights of 25 meters, and its branches can spread up to 10 meters at the base.

Cypress Australian Blue Oil or ABC as it is often known, has some unique characteristics in the world of essential oils. Guaiazulene, which is not found in natural essential oils derived from wood, gives it its striking blue colour and also confers qualities similar to those of the other natural blue oils, such as Chamomile, Artemisia and Tansy.

Cypress Australian Blue is used for its skincare properties  specifically moisturising and soothing properties. Amongst aromatherapists and manufacturers, this oil is considered very similar to Blue Chamomile. It is also regarded as being a soothing, relaxing agent for the nerves without sedative properties.

The Australian Aborigines knew of the skin moisturising properties of Blue Cypress for thousands of years; they used it to protect their skin from the harsh desert climate. In aromatherapy circles, the oil is sometimes referred to as the ABC essential oil  Australian Blue Cypress. It is rare and carries a premium as a result.