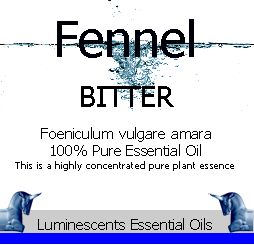 Fennel (from which Fennel Bitter or foeniculum-vulgare Acerbitas Essential Oil is steam distilled) is a perennial herb, native to southern Europe and the Mediterranean area. It grows up to 1.5 metres high with feathery leaves and beautiful golden yellow flowers. It belongs to the carrot family and has now been naturalised almost everywhere. It is an essential ingredient in Absinthe.

Florence Fennel or Finocchio is the plant with the bulbous basal growth that is used as a vegetable.

Fennel Bitter is credited with being an antiseptic, antispasmodic, carminative, depurative, diuretic, expectorant, laxative, stimulant, splenic, stomachic, and as a vermifuge. Aromatherapists credit it to be invigorating, restoring, stimulating, and warming.

None Documented but we like it with all the Lavenders and Cedar.

A herb of ancient repute, believed to encourage longevity, courage and strength. The Romans valued it for its digestive properties and the Greeks believed it to be a slimming herb.

The word “fennel” comes from Middle English (fenel or fenyl) Which in turn came from Old English (fenol) and that was derived from the latin (feniculum or foeniculum) the diminutive of (fenum or faenum) meaning  simply “hay”.

In English folklore, fennel is one of the nine plants invoked in the Pagan Anglo Saxon “Nine Herbs Charm” which was first recorded in the 10th century.

May cause skin irritation in some individuals.