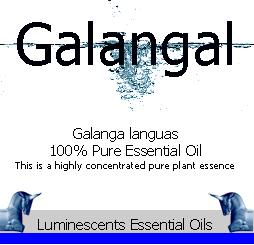 SCENT: Galangal Essential Oil has a camphoraceous, herbaceous aroma, it has been likened to cardamom and myrtle. It adds warmth and spice to a fragrance blend, and is used as a base note in perfumery.

Galangal (Galanga languas) is closely related to Ginger and has similar properties and uses. Greater Galangal is native to Java. It is widely used in Indonesia and Malaysia as a food flavouring and spice. Lesser Galangal is native to China, growing mainly on the southeast coast. It is also grown in India and the rest of South East Asia. Although barely used in Europe today, both Galangals were formerly imported in great quantity, as medicine and spice. It was known to the ancient Indians, and has been in the West since the Middle Ages. Its stimulant and tonic properties are recognized by the Arabs who ginger up their horses with it, and by the Tartars, who take it in tea. In the East, it is taken powdered as a snuff, and is used in perfumery and in brewing.

It is also known as Blue Ginger, Galanga or Galingale.

In aromatherapy, specifically in massage, it is regarded as beneficial to the circulation; for chesty coughs, stomach ache, tight muscles, stiffness, or exhaustion.

The whole fresh rhizome is very hard, and slicing it requires a very sharp knife and deft finger work. Whilst closely related to Ginger, the spice tastes nothing like it either fresh or dried but when cooked its is similar. Cooks will, however, never substitute one for the other in their recipes. A mixture of Galangal and lime juice is used as a tonic in parts of Southeast Asia