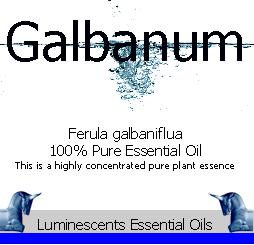 CONSISTENCY: Can be thick and slightly viscous

Galbanum (Ferula galbaniflua) is an aromatic gum resin, the product of certain Persian plant species, chiefly Ferula gummosa, syn. galbaniflua and Ferula rubricaulis. Galbanum-yielding plants grow plentifully on the slopes of the mountain ranges of northern Iran. It occurs usually in hard or soft, irregular, more or less translucent and shining lumps, or occasionally in separate tears, of a light-brown, yellowish or greenish-yellow colour, and has a disagreeable, bitter taste, a peculiar, somewhat musky odour, and a specific gravity of 1.212. It contains about 8% of terpene; about 65% of a resin which contains sulphur; about 20% of gum; and a very small quantity of the colourless crystalline substance umbelliferone. The plant will yield this essential oil if the gum is steam distilled.

Almost exclusively used in the perfume industry in the West. Its traditional healing uses which are now deemed obsolescent were as an antispasmodic and considered an intermediate between Ammoniac and asafoetida (to which it is related)  for relieving air passages and used externally as a plaster for inflammatory swellings.

It is occasionally used in the making of modern perfume, and is the ingredient which gives the distinctively unique smell to the fragrance “Must” by Cartier. Hippocrates employed it in medicine, and Pliny (Nat. Hist. xxiv. 13) ascribes to it extraordinary curative powers, concluding his account of it with the assertion that “the very touch of it mixed with oil of spondylium is sufficient to kill a serpent.” Its use in medicine is, however, obsolescent..

Galbanum is one of the oldest of resins recorded. In the Book of Exodus 30:34, it is mentioned as a sweet spice, to be used in the making of a perfume for the tabernacle. However, Rabbi Shelomo ben Yitschak of the 1100’s comments on this passage that Galabanum is bitter and was included in the incense as a reminder of deliberate and unrepentant sinners.