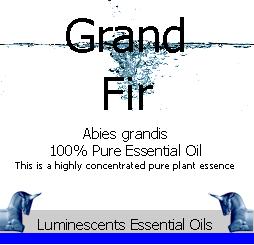 SCENT: Grand Fir Needle essential oil has a fresh, woody, earthy, sweet scent that is much like woodland after the rain.

Grand Fir or as its is sometimes called Giant Fir (Abies grandis) is a fir native to the Pacific Northwest of North America, occurring at altitudes of sea level to 1,800 m. It is a large evergreen coniferous tree growing to 40-70 m (exceptionally 80 m) tall and with a trunk diameter of up to 2 metres.