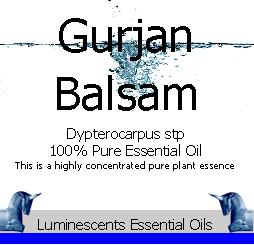 COLOUR: Pale or colourless ranging to dark red or brown

Gurjan Balsam is obtained from the Dipterocarpus tree which as a genus has about 70 species, most growing in South East Asia.  Its generic name comes from the Greek and means two-winged.

The oil is used within the perfume industry mainly nowdays but has traditional medicinal uses whoch are now no longer in favour. It is still sometimes used as an ingredient in skin care applications.

It is often use to adulterate Copaiba as its properties are similar and is sometimes used as a substitute for Linseed in rather crude paint material.

Gurjun Balsam was once reputed to stimulate the heart and increase blood pressure. Other uses included lessening mucous secretions and relieving respiratory disorders like asthma, chronic cough, and bronchitis. Gurjun Balsam Oil has been used in the past as a treatment for rheumatic pain and skin problems including nappy rash, bedsores, eczema, and wounds.

As with all essential oils, they should not be used during pregnancy and never ingested (taken internally) and should be kept away from children and pets. No medicinal claims are made for this product and the notes above are provided for guidance purposes only. Essential Oils are powerful plant extracts and should be used with extreme caution. You should seek the advice of a qualified practitioner should you be in any doubt.