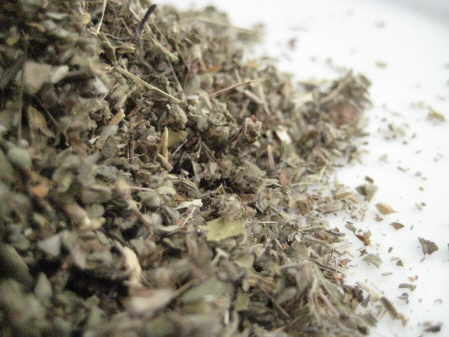 Marshmallow Leaf is a native of most countries of Europe, from Denmark southward. It grows in salt marshes, in damp meadows, by the sides of ditches, by the sea and on the banks of tidal rivers. In the UK it grows almost everywhere but occurs mostly in the maritime counties in the south of England, ranging as far north as Lincolnshire. In Scotland it has been deliberately introduced.

Marshmallow Leaf is traditionally used as for the following purposes:-

Please note that Marshmallow Leaf is more gentle than the root.

The excellent demulcent (soothing and gel creating) and emollient (moisturising) properties of Marshmallow Leaf make it a very useful herb in the relief of  inflammation and irritation of the alimentary canal, so is used frequently in cases of Iritable Bowel Syndrome (IBS) but also for the urinary system and most probably best known for sore throats, comgestion and respiratory complaints.

If left for some minutes to get cool the infusion will form a thin gel which amply demonstrates this herb’s noted demulcent properties. It is this gel like behaviour that coats the throat or the alimentary tract, forming a porous barrier that allows normal cellular behaviour but creates a protective film to guard against further irritation and allows the inflamed area to calm down.