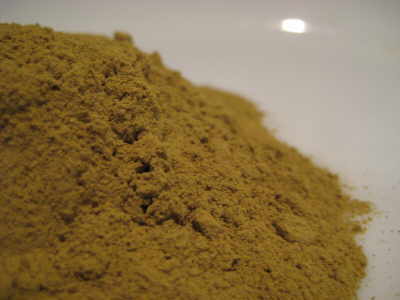 Taking goldenseal over a long period of time can reduce absorption of B vitamins. Avoid Goldenseal during pregnancy and lactation, with gastrointestinal inflammation, and with proinflammatory disorders.

More than 60 million Goldenseal plants are picked each year without being replaced.

Goldenseal (Hydrastis canadensis) is a perennial herb in the buttercup family Ranunculaceae, native to southeastern Canada and the northeastern United States. It may be distinguished by its thick, yellow knotted rootstock. The stem is purplish and hairy above ground and yellow below ground where it connects to the yellow rhizome. The plant bears 2 palmate, hairy leaves with 5-7 double-toothed lobes and single, small, inconspicuous flowers with greenish white stamens in the late spring. It bears a single berry like a large raspberry with 10-30 seeds in the summer.

It is also known as Orange-root, Orangeroot and Yellow Puccoon

Goldenseal is often used as a multi-purpose remedy, having many different medicinal properties. In addition to working as a topical antimicrobial, it can also be taken internally as a digestion aid, and can remove canker sores when gargled. Goldenseal may be purchased in salve, tablet, tincture form, or as a bulk powder. It is EXTREMELY RARE to find it in this raw form. Goldenseal is often used to boost the medicinal effects of other herbs it is blended or formulated with.

A second species from Japan, previously listed as Hydrastis palmatum, is sufficiently distinct that it is now usually treated in a separate genus, as Glaucidium palmatum

At the time of the European conquest of the Americas, Goldenseal was in extensive use among certain Native American tribes of North America, both as a medicine and as a colouring material. Prof. Benjamin Smith Barton in his first edition of “Collections for an Essay Toward a Materia Medica of the United States” (1798), refers to the Cherokee use of the plant as a cure for cancer. Later, he calls attention to its properties as a bitter tonic, and as a local wash for ophthalmia. It became a favourite of the Eclectics from the time of Constantine Raffinesque in the 1830s.

Herbalists today consider Goldenseal an alterative, anti-catarrhal, anti-inflammatory, antiseptic, astringent, bitter tonic, laxative, and muscular stimulant. They recommend the herb for gastritis, colitis, duodenal ulcers, loss of appetite and liver disease. They discuss the astringent effect it has on mucous membranes of the upper respiratory tract, the gastrointestinal tract, the bladder, and rectum (applied topically), and the skin. The herb is very bitter, which stimulates the appetite and aids digestion, and often stimulates bile secretion.

It contains the isoquinoline alkaloids: hydrastine, berberine, berberastine, hydrastinine, tetrahydroberberastine, canadine, and canalidine. A related compound, 8-oxotetrahydrothalifendine was identified in one study. Berberine and hydrastine act as quaternary bases and are poorly soluble in water but freely soluble in alcohol.