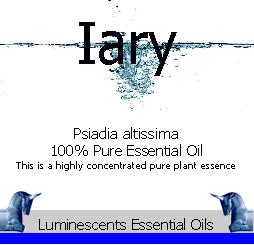 SCENT: Iary Essential Oil is very fragrant and woody, full of turpenes so resinous with a hint of eucalyptus and Fir or Pine

Psiadia altissima from which Iary essential oil is distilled is an Eastern Madagascan native sometimes called Arina. It is a rare essential oil and seldom held by us in stock for long when we can manage to obtain any. The essential oil is remarkably woody and fragrantly green with hints of Eucalyptus and maybe Fir or perhaps Pine. The oil is made from the leaves and twigs of the plant by steam distillation and contains 80% turpenes of which it was composed of monoterpenes and sesquiterpenes, among which beta-pinene (39.7%) was the main component of this oil. It is a thin oil, top note. The plant belongs to the Aster family.

Iary essential oil has been used traditionally by the local population of Madagascar as an insect repellent but is also used to relieve persistant itching and sore throats, coughs and bronchial conditions.