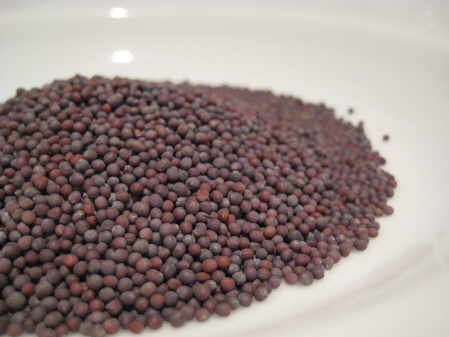 Mustard is a notifiable Allergen

Mustards have been cultivated for their seeds for over 5 000 years. White/yellow mustard is a native of the Mediterranean, central Asia, and North Africa. Brown and Black mustards originated in Asia.

These particular Mustard seeds which are typically used in Indian cuisine (but you can use the brown variety if you wish as a reasonable but slightly inferior substitute) known in Hindi/Urdu as Sarson, in Punjabi as Sarron. These are used as a spice in North India and Nepal. The seeds are usually roasted until they pop. They are also planted to grow saag (greens) which are stir-fried and eaten as a vegetable preparation sarson ka saag (In Punjabi Sarron Da Saag) In Maharastra the seed is called Mohari.

The oil cold pressed from Black Mustard seed is particularly good for body massage during extreme winters, as it keeps the body warm and moist.

Mustards have been used in traditional folk medicine as a stimulant, diuretic, and purgative, and to treat a variety of ailments including peritonitis and neuralgia.

In culinary terms, ground down, the seeds are made into a condiment paste in the west but in the east, the seeds are often popped when lightly heated either by dry roasting or shallow frying to impart their heat and flavour in spicy paste mixes that form the basis of many a curry.