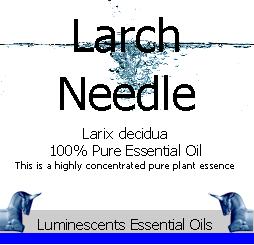 SCENT: Larch Needle Essential Oil has a clear, herbaceous and a lightly resinous aroma with a faint fruity and woody backnote.

Larix decidua, from which this Larch Needle Essential Oil is distlled,  is also known as the  European larch, and is native to the mountains of central Europe, in the Alps and Carpathian Mountains,  southern Lithuania and lowland districts in Poland. Its life span is given by different authorities as anything between 100 and 350 years, but the most reliable is normally about 200 years. It has been naturalised throughout North America and Canada and is widely grown as an ornamental tree. It is known as Tamarack by the Algonquin peoples although we think that is the term referred to the native North American Larch

Larch Needle Essential Oil is reputed, rather like White Sage, the clear negativity and promote creativity. It has been used against influenza, colds and coughs for centuries and it is not at all a bad expectorant. It disinfects so can be used on minor wounds , it is analgesic and a slight laxative. It has been used to treat oedema but to what effect is nort reported so is largely considered to be a tradition.

History of The Larch:-

It is thought to have been first cultivated in Britain in 1629. The Diarist, John Evelyn was and enthusiast and promoted the wider planting and use of the tree during the English Restoration. Three successive Dukes of Atholl planted it copiously as great enthusiasts and the 4th  Duke wrote “Observations on Larch” in 1807 encouraging its cultivation, which he practiced on a large scale.

European larch is widely cultivated in southern Canada and the northeastern United States. It has been naturalised in Maine, Michigan, New York, Connecticut, New Hampshire, Vermont, and Rhode Island.