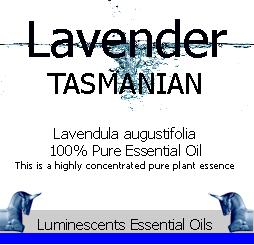 SCENT: Lavander Tasmanian Essential Oil is a rare species with a well-balanced and full-bodied aroma. The temperate climatic requirement for growing Lavandula species has resulted in plantings in all states of Australia but the most interest appears to be in Tasmania, Victoria and southern New South Wales.

Lavender Tasmanian Essential Oil is distilled from the species of Lavender called Lavendula augustifolia and  is an evergreen woody shrub, up to 1 metre tall, with pale green, narrow linear leaves and violet blue flowers.

This is a very rare species cultivated in Tasmania and belongs to the Pterostachys group. Very little of it is grown but as it becomes more popular so the price will drop and the availability increase.